Resurrection — somewhat of a ‘grave situation’ 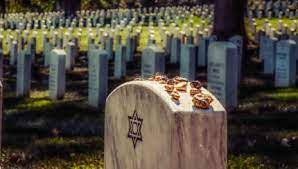 (It falls on the Shabbat immediately preceding the new month of ELUL (or E.l.u.l: “I am for my beloved as my beloved is for me” — “Ani l’Dodi v’Dodi li”).
It is also a month in which we visit the graves of our loved ones, whom we consider to remain among us, certainly in spirit . . .
___________________
The section of the Torah read this Saturday (Shabbat) is referred to as Parshat Eikev and includes the second paragraph of the Shema Yisrael,
arguably the most sacred prayer
of the entire Jewish tradition. Within the Shema Yisrael, exacted almost word for word, is a coded reference to the

‘Resurrection of the Dead’

considered a strongly held belief in Jewish Law and in Jewish tradition. It may in fact be one of the very reasons
for the legal and emotional prohibition of
cremation, which is held as a sacred understanding going as far back as references, such as these,
in both our Parsha and the entire legal corpus of the Talmudic traditions and in the variant Codes of Jewish law.

Note: Here below is a doctored theological perspective and, outside of Orthodoxy, is considered more or less as a religious apologia:

I find this interesting . . . even if it is not exactly my understanding.

Resurrection in the Jewish tradition is not only a private matter. It is a communally based belief. All of those who stood at Sinai, and those of our generation, will be revived. It should be understood that Judaism has both a ‘national’ and a ‘historic character. And because of that, it is understood that the community will live again as ‘a whole people.’ The individual, even in death, is not understood as separated from the society in which he or she has lived.

The physical resurrection affirms unequivocally that man’s soul and his body are the creations of a holy Gd. There is a tendency to assume that the affirmation of a spiritual dimension in man must bring with it the corollary that his physical being is depreciated. Indeed, such has been the development of the body-soul duality in both the Christian tradition and in Eastern religions and accounts for their glorification of asceticism.

Second Temple Period: Unlike the Sadducees, a Jewish sect closely identified with the Temple Priesthood, who are generally held to have rejected any existence after death, the sources vary on the beliefs of the Pharisees on ‘Resurrection.” According to the Christian Bible, the Pharisees believed in the Resurrection of the Dead but it does not specify whether this resurrection included the flesh or not. According to Josephus, the Pharisees held that only the soul was immortal and the souls of good people would be either resurrected or reincarnated and “pass into other bodies,” while “the souls of the wicked will suffer eternal punishment.”