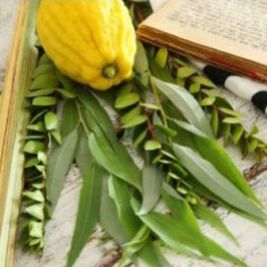 Although Hoshana Raba may technically be the “last day of Sukkot, the Rabbis (not the Rabbis of the Talmud, rather much later, the Rabbis called ‘the Geonim,’ (< — yes, they were the Babylonian rabbis) decided to treat Shemini Atzeret and Simchat Torah as part of Sukkot.

Two cryptic references in the Torah cause the confusion about the status of Shemini Atzeret. In both Leviticus and Numbers, God commands that ‘the eighth (the ‘shemini’) day’ of Sukkot– to be a “sacred occasion” and an atzeret, perhaps to be translated as a “solemn gathering.”

So — what is an Atzeret?

The inherent problem is that no one really knows exactly what ‘atzeret’ means. Possibly it comes from the word atzar, meaning “stop,” and thus implies that we are to stop working or to refrain from work. On the other hand, atzeret may also be defined in its textual context, which implies (i.e. this is pure conjecture) that it is some sort of deliberate extension of the prior seven days. This lack of verbal clarity is very likely the reason why the rabbinic sages seemed to struggle with the precise meaning of the holiday.

Important Note: The earliest rabbinic reference to Shemini Atzeret calls it ‘yom tov aharon shel ha-hag,’ or ‘the last day of the festival.’

The Talmud (Taanit 28a -31b) however, declares, “The eighth day is a festival in its own right.” At the same time, the Talmud (Taanit 28b) attempts to distinguish it from Sukkot, as there are 70 temple sacrifices given throughout Sukkot, compared to only one given on Shemini Atzeret. (This distinction was only theoretical as the Temple had been destroyed five centuries prior to the redaction of the Talmud.)

Although Shemini Atzeret looks a lot like Sukkot, there are four significant differences:

Shemini Atzeret: is tied directly to Simchat Torah, but how?

Simchat Torah is the second day of Shemini Atzeret (but it is not in the Torah). Even more unusual, it is not in the Talmud. It is only celebrated among the descendants of Babylonian Jews in the Diaspora. Jews of the Land of Israel had no need of a second day and further had no need of a one-year cycle. Simchat Torah is the conclusion of a one year cycle only, not the three year cycle of Palestinian Jewry (literally).

Conclusion: the Torah reading cycle on Simchat Torah concludes in an instant and begins in a moment.