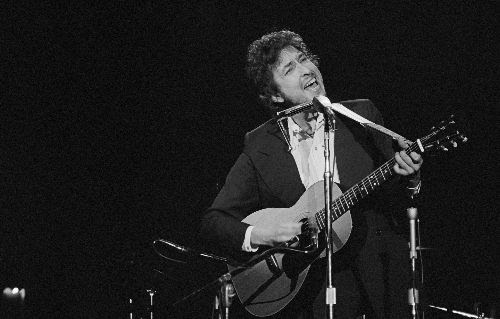 When Dylan sang Neighborhood Bully, anti Semites, posing as self righteous anti Zionists, tuned him out and turned him off . . . perhaps because his message was true and remains true.

Here’s the truth: Anti Zionism is just the newest form of a high tech ‘anti-Semitic-Pogrom’ — and yet it is far deadlier because it seeks to mask itself in a faux-self-righteous-liberalism on the left and a poisonous blood libel/nation hatred on the right. It now manifests itself in an out-of-control ‘cancel (cancer) culture’ which denies us, as an indigenous people, a connection to our land and to our continued physical and spiritual survival.

Here is what is painful to the Jew-hating anti Zionist:
The People of Israel Lives . . .
and it is here that Bob Dylan speaks volumes . . .

Bob Dylan has never made it easy for those who analyze his music with almost Talmudic fervor. Dylan, who turned 80 on Monday, remains a mystifying figure in American culture, even as many of his songs feel as relevant today as they did when they were first produced.

Dylan’s Zionist anthem: “Neighborhood Bully,” from Dylan’s 1983 record Infidels, was released a year after the First Lebanon War and two years after an airstrike in which Israel destroyed an Iraqi nuclear reactor outside Baghdad. But its themes have clear parallels with the recent conflict between Israel and Hamas. The song, a hard-driving rock number, never explicitly mentions Israel, yet it is widely interpreted as a Zionist anthem in the form of a biting satire lambasting those who fault the Jewish state for defending itself:

While Dylan’s Jewishness has been examined and reexamined over the years, relatively little attention has been paid to his 1983 song “Neighborhood Bully” — a rare declaration of full-throated Israel support by a mainstream American rocker.

The lyrics equate Israel with an “exiled man,” who is unjustly labeled a bully for fending off constant attacks by his neighbors . . . . Well, he knocked out a lynch mob, he was criticized . . .

. . . Old women condemned him, said he should apologize.
Then he destroyed a bomb factory, nobody was glad
The bombs were meant for him. He was supposed to feel bad
He’s the neighborhood bully

Have a look at the full lyrics here: https://www.bobdylan.com/songs/neighborhood-bully/

Because we are a new Shul, we are equally a school which is committed to study and to learn from the past. As a result, we are more than well aware of the old ways of Jew hatred — as we have experienced the old Jew hatred in the past, we now more clearly see ‘the new’ — and for the record, we are not deceived.

Hope to see you soon,

Important: Have a look at the Brett Stevens piece (in class materials and attachments) from Tuesday’s New York Times . . . seems like someone didn’t ‘get the memo.’

In connection to the statement re the importance of Torah study, the Gemara relates the following incident:

Rabbi Tarfon and the Elders were reclining in a loft in the town of Lod, when a question was asked of them: Is study greater or is action greater? first Rabbi Tarfon answered: Action is greater. then Rabbi Akiva answered and said: Study is greater.

Everyone answered and said: Study is greater, but not as an independent value; rather, it is greater as study leads to action.