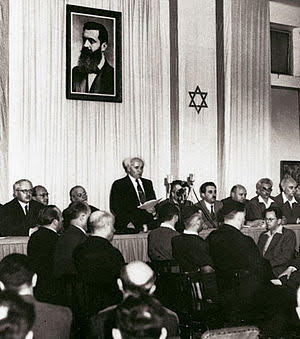 The Israeli Independence Day (יום העצמאות, Yom Ha’atzmaut) is a day commemorating the Israeli Declaration of Independence in 1948. It is ‘marked’ by official and unofficial ceremonies and observances within Jewish communities both in Israel and even worldwide. These ceremonies and observances range from the ‘miraculous’ to reactions which consider the ‘founding of the State of Israel as blasphemous — much of this reaction is surprising to Jewish communities throughout the world, even including our own and yet it persists (see either Satmar or Neturei Karta for further expression of this theology).

Jewish note: Here below is perhaps the recurring operative ‘motif of identity‘ we have spoken of repeatedly in regard to Abraham and Lot, of Moses and his ‘mothers,’ of Saul and his Prophet Samuel, of Mordechai and his niece Esther, of Daniel and his Exilic Persian community and of Ruth and Naomi and Jewish Bethlehem.

The Israeli understanding of Independence Day was founded on the declaration of the establishment of the State of Israel by the then Jewish leadership headed by David Ben-Gurion, (who would become Israel’s first Prime Minister) on 14 May 1948. Michael Oren, a well known (former) ambassador of Israel to the United States, wrote that the mood outside of Ben-Gurion’s home just prior to the declaration appeared to be joyous: (little did they know what would come next, realizing fully of course, what they had just lived through) . . .

The Jews of then Palestine … were dancing because they were about to realize what was one of the most remarkable and inspiring achievements in human history: A people which had been exiled from its homeland two thousand years before, which had endured countless pogroms, expulsions, and persecutions, but which had refused to relinquish its identity—which had, on the contrary, substantially strengthened that identity; a people which only a few years before had been the victim of mankind’s largest single act of mass murder, killing a third of the world’s Jews, that people was returning home as sovereign citizens in their own independent state. (from “Ben-Gurion and the Return to Jewish Power”)

Here above is perhaps the ‘operative motif of identity’ we have spoken of in regard to the ‘identities’ of Abraham and Lot, of Moses and his mothers, of Saul as King and Samuel as the reproving Prophet, of Mordechai and his niece Esther, of Daniel and his exilic community and of Ruth and Naomi and their Bethlehem.’

Not only did this independence day signal an almost miraculous-like-redemption-and-deliverance, but to the Jews of 1948, this day would signal a change in Jewish ‘identity.’ An ‘identity’ that had been in many cases violently thrust upon Jews and Jewish communities throughout the last 2,000 years. Only now, close to 20 centuries later, this same ‘identity’ appeared to change in what it meant to be Jewish, especially in light of the promises of the Prophets.

For them and for those of us who were born and raised in the 20th Century: This is especially so given the experience of their immediate past 10 years (of 1938 thru 1948) and it’s not difficult to see this Day of Independence, as a sign of a new and unfamiliar freedom. To us, those of us aware of Biblical tradition, this would mean nothing short of a change . . .

And yet, as we all know, ‘identity’ can be stubbornly-resistant to change — this is exactly what our ancestors who emerged from Egypt experienced . . . a change in experience, a change in identity.

If one lived through the events of this past 20th Century, whether Jew or Gentile, then this day should have profound religious meaning. It will be nothing short of miracle when we meet this Wednesday evening at 7:00 PM EST that we have a spirited discussion in which full agreement is even possible.

I believe our identity ‘can handle it’ (for reference see “A Few Good Men”).

A calendrical note on the Hebrew / Jewish Calendar . . .

Because Israel declared independence on 14 May 1948, which at the time corresponded to the Hebrew date of the 5th of Iyar, Yom Ha’atzmaut was originally celebrated on that date.

This year, on the Hebrew calendar, since Jewish days begin the preceding evening, “Yom Haatzmaut” will take place from sunset to sunset, on the 14th thru the 15th April (2021).

For a selection of Religious changes / Miracles / Prayers, Blessings and Practises, see below: