The Torah, The Nevi’im and the Ketuvim — The TaNaKh — תנ’’ך

These fragments, mostly on parchment as well as on pieces of papyrus, are believed to date between the 3rd century B.C. to the 1st century A.D. and and include the earliest known copies of the Hebrew Bible, the Tanakh, in the Land of Israel. 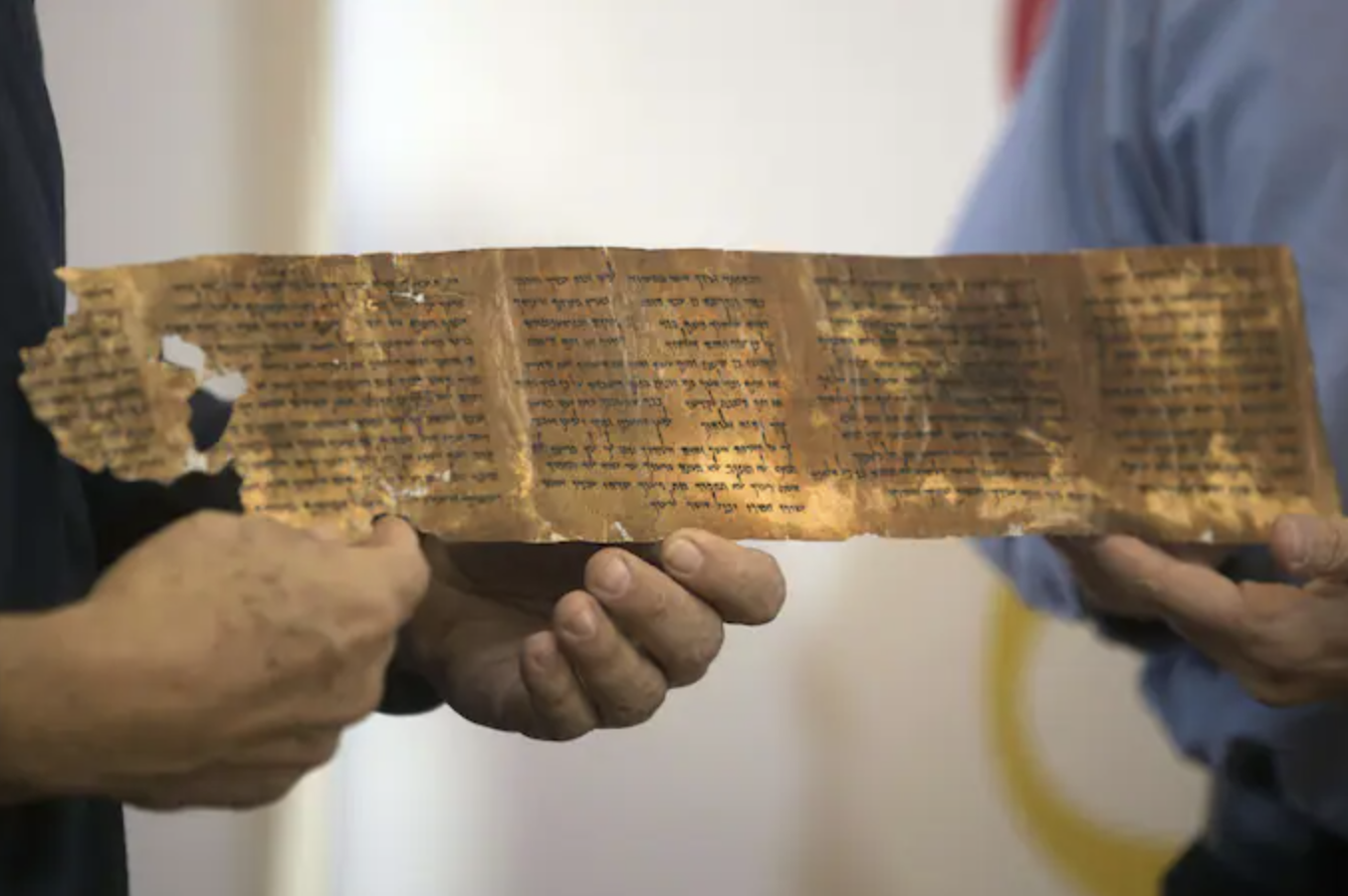 A picture taken on Dec. 18, 2012 shows a replica of a segment from the 2,000-year-old manuscript of the Ten Commandments during a press conference in the Rockefeller Museum in Jerusalem.

TEL AVIV — Israeli archeologists on Tuesday revealed dozens of recently-discovered fragments of biblical texts, known as the Dead Sea Scrolls, which build on a collection of ancient Jewish religious manuscripts that was first discovered 60 years ago.

Israel’s Antiquities Authorities said that the pieces of parchment are from the books of the Prophets Zechariah and Nahum which have been radiocarboned and dated to the 2nd century A.D.

The discovery is the result of a years-long Israeli excavation in the Judean Desert and are believed to belong to a set known as “The Cave of Horror,” named for the 40 human skeletons found during excavations in the 1960s. They bear a Jewish translation into Greek of the Twelve Minor Prophets.

“These finds are not just important to our own cultural heritage, but to that of the entire world,” said Avi Cohen, CEO of the Ministry of Jerusalem and Heritage, which was involved in the excavation.

“The scroll fragments containing biblical texts, the coins and the additional finds from the Second Temple Period that were found in this unique project directly attest to the Jewish heritage of the region and the inseparable bond between the Jewish cultural activities and our place in this land,” he added.

The artifacts are believed to have been stashed in the cave during the Bar Kochba Revolt, an armed Jewish uprising against Rome during the reign of Emperor Hadrian, between 132 and 136 A.D. intended to thwart the Roman design to destroy the Jewish presence in Jerusalem and rebuild it as a pagan city.

Prior to the coronavirus crisis, dozens of young Israelis participated in the excavations. “The desert team showed exceptional courage, dedication and devotion to purpose, rappelling down to caves located between heaven and earth, digging and sifting through them, enduring thick and suffocating dust, and returning with gifts of immeasurable worth for mankind,” said Israel Antiquities Authority’s director Israel Hasson.

The Dead Sea Scrolls, a collection of Jewish texts, were first happened upon by Bedouin shepherds in the desert caves of the West Bank, near the Dead Sea and the ancient city of Qumran, in 1946. The Bedouins in turn sold these leather fragments to a Bethlehem shoemaker and then in what we now know, in a clandestine operation, these fragments were bought and smuggled back into Jerusalem and returned after nearly 2,000 years to the Jewish people. In the intervening years, many manuscripts were essentially looted and smuggled into Jordanian government hands as Jordan continues to claim them as their rightful and legitimate cultural heritage. Due to the continuing threat of Bedouin and Jordanian antiquities looting and grave robbing, Israel has committed to the continued search and retrieval of the Jewish national heritage which remains under continued threat. The excavations in and around the Qumran area have conitued to yield multiple manuscripts and fragments, many of which have become known as the now famous Dead Sea Scrolls.

These recent fragments are believed to date between the 3rd century B.C. to the 1st century C.E. and include the earliest known copies of the Hebrew Bible and have added to our knowledge of the proliferation of Jewish sectarian movements which existed throughout the Second Temple Period and for Christian scholarship, during the time of Jesus.

Benji update: The Eagle has landed — and he has returned. No, I am, not referring to the messiah, rather to our very own ‘First Born’ who has returned from a land called Holy. For many in our family, this was a crowning achievement and the end of a long awaited reunion of sorts. For others, this Passover visit now becomes more onerous than the ancients could have possibly imagined (and even for many of our fellow Passover observers).

While his mother is exceedingly happy to have him home and his siblings share the excitement, yet his father is busy both planning the seder, while simultaneously petitioning the Israeli government to take him back. I am not entirely sure if this would qualify as a ‘Rachmones-like-Repatriation’ but I am comforted by the message of the Prophets of ‘all in due time — all in due time.’

I think I hear the words of Shalom Aleichem’s Tevya, my personal 19th Century ‘coach’ and mentor, reverberating in my now 21st Century ears . . . “Tradition!”

And just to complicate this or maybe to some, even clarify . . . . all of this has the appearance of being, like the rest of all life, “Mitten d’Rinnen.”

Please remember to join us Wednesday evenings at 7:00 PM EDT and Sunday afternoons at 3:00 PM EDT. All are welcome and no preparation is required.