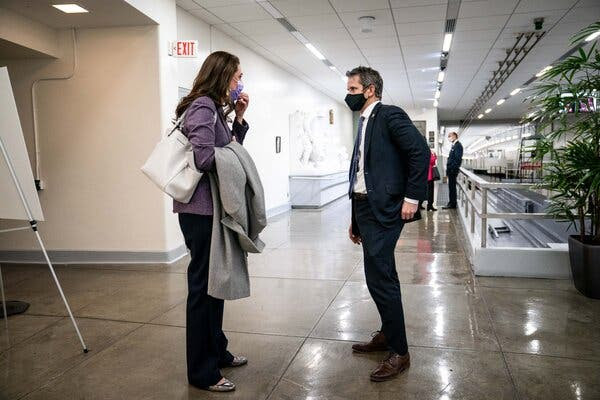 Two days after Mr. Kinzinger called for removing Mr. Trump from office following the Jan. 6 riot at the Capitol, 11 members of his family sent him a handwritten two-page letter, saying he was in cahoots with “the devil’s army” for making a public break with the president.

“Oh my, what a disappointment you are to us and to God!” they wrote. “You have embarrassed the Kinzinger family name!” 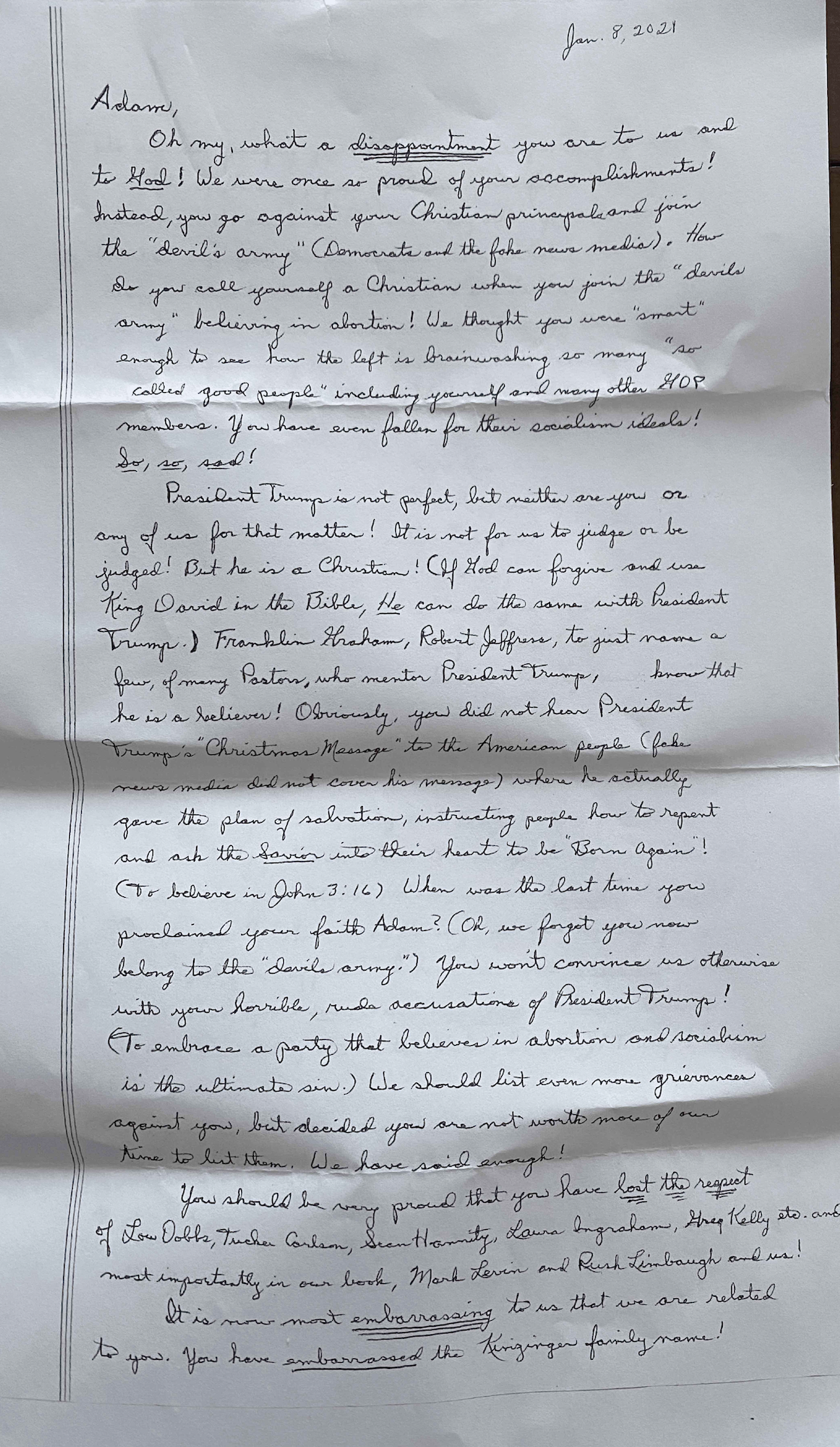 A hand-written letter from several members of Rep. Adam Kinzinger’s family. The Times has redacted the names of some family members who signed the letter but whom we did not interview.

The author of the letter was Karen Otto, Mr. Kinzinger’s cousin, who paid $7 to send it by certified mail to Mr. Kinzinger’s father — to make sure the congressman would see it, which he did. She also sent copies to Republicans across Illinois, including other members of the state’s congressional delegation. “I wanted Adam to be shunned,” she said in an interview.

Apparently to his family, Adam Kinzinger has forgotten who he is, not acted ‘as one of them’ and consequently, he will now be turned out and shunned.  To them, politically and religiously, it cuts deep.  It is not his conscience they care for, but for him to be who and what they consider themselves to be.  Not to compare this situation (too closely) to King Saul, a one-time-king of Israel, but there does appear to be a sort of connecting resonance for our purposes, purposes well-worth noting.

Kingzinger would claim that he is acting from a sense of honor and out of conscience — and it goes without saying that King Saul would claim the same.  Saul, is not so much forgetting his people or his Gd (or so he claims) as much as he is now clinging to a new found ‘royal’ identity, arrogant, exciting and compelling as it was.

Ironically, Queen Esther, a descendant of his, comes close to doing the same in chapter 4 of the scroll by her name.  All of these stories culminate in bloodshed with Saul losing the kingship, Agag his life; Esther and the Jews narrowly escaping mass death, and Haman and his sons, at  the end of it all, apparently find it.  The world seems upside down and that may be the very reason these masks come off only after the deaths and the violence have subsided, for them and for us as well.

(Photo to the left: Edwin Longdsen Long (1829-91) Queen Esther is preparing to see King Xerxes I, on whom she will prevail to spare the Jewish people from genocide.)

Some will throw up their hands and declare that this falls neatly into a lesser enigmatic understanding of Jewish history, one we often repeat as, ‘they tried to kill us, we won, let’s eat.’

Conscience is sometimes understood,  especially when it’s all said and done,  as true identity.  The problem, all too often, is that conscience is relative in people, and while we are on the subject, it is often our relatives who remind us of how they want our conscience to exhibit to the world around us.

To our understanding, as comfortable as Esther was in her palace, and equally apprehensive of outing herself as a Jew, ultimately it was a conscious (and a ‘conscience’) decision on her part, even if she was uncomfortably pushed by her uncle to step forward and plead for the life of the Jews, as she would claim, for the lives of her people.

In this season of miracles, great and small, hopes and aspirations both dashed and realized alike, ‘wishing Mr Kinzinger well’ as he may soon be out of a job  — and reminding him that conscience among  many peoples and especially in the cutthroat life and death battleground of politics is often quite ‘relative’ and one can pay a very heavy price, or even perhaps more so for betraying one’s own conscience, especially when one is attempting to align with the ‘right side of history.’

We Jews have faced this many times, in just as many periods of our history.  Ultimately we have succeeded best when we have remembered who we are and to whom we owe our lives, both ‘in this world’ and ‘in the next.’

Hoping to see everyone this Wednesday evening at 7:00 PM EST and then again this Sunday at 3:00 PM EST as we explore these ideas and plumb the very depths of both our conscience and our identity . . . . ours and our relatives, our people, near and far.