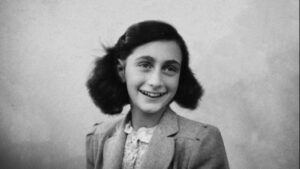 Anne Frank – is she still Jewish or is she owned by the Dutch. . .

I am always intrigued when the subject of Holland or the Netherlands comes up in conversation. As you know, and as the story goes, the Dutch as feted, heroically saved their Jews in the Second World War. My mind of course wanders across the open tulip fields of the lowlands as I think of how many Jews were spirited out for large sums of money only to be shot at close range by smiling and cackling Dutch citizens waiting for these rich Jews to try and cross over to freedom. As if they weren’t smiling and cackling at the thought of the many jewels and concealed works of art they hoped to scoop up after their rather civilized, and yet crazed and carnival-like massacres.

And yet, it was the same country which gave us Anne Frank, who after hiding out with her family for almost two years in a small attic connecter, writing feverishly in her early adolescence of her desire to live, just like everyone else, and yet was betrayed not by the Nazis, who were all too happy to deport her and her family to Auschwitz, but by her fellow Dutch citizens. This representation of the Dutch man we have been told has been described as a petty criminal, but on second look, perhaps he did so not just out of his petty criminality, but perhaps because he and his Dutch ilk did not believe the Jews were either Dutch enough or even worthy of being considered human at all. Vermin . . .

With Anne Frank’s dying of Typhus, the ‘ordinary citizens’ who staffed the crematoria, along with their Jew killing accomplices were somehow denied their feeding-frenzy like opportunity to gas her to death. Of note, current Dutch Neo Nazis consider her premature death to Typhus as a betrayal to the deserving appetite of Zyklon B, denied the opportunity of doing its one-and-only job, the tortured ‘killing of insects and vermin.’

Lest we forget, in this case, It was the Dutch who couldn’t wait to betray the Jews residing like vermin in their beloved home and country.

And yes, it is understood that the outstanding question is tantamount to an indictment of the Dutch people, who upon a more truthful examination than traditionally has been given or reported, somehow managed to produce a rather significant number of collaborators and thieves along with their own homegrown regiments of Dutch Nazis.

It is this truth which emerges now that comes to embody the truth of the Dutch people at the time; a truth that they have sought to hide these past two generations since their complicit willingness to kill Jews and cover up their crimes under the guise of ‘this is our own national Dutch business, and importantly, ‘our artworks are ours, for our benefit, not for the true inheritors whom we complicity cooperated in attempting to carry out their genocide.’

Two generations after the war, in recovering the real truth of the Dutch complicit murder of Jews, the truth continues to emerge, however painfully and ever so slowly.

And yet, just as with canvasses often painted over in the past, the inner truth of an original artwork and the original outlines will always reappear, because it is with time, however long in waiting, that all truth eventually comes to the surface.

Just as it is now with Jewish artwork and property, is just as it was with the blood of Abel in Genesis; his blood crying out from the ground and demanding justice.

The Nazis are gone and we remain, two generations later, demanding justice.

To the Lerhaus Newshul ever growing and expanding community, along with everyone who has lived in the wake of events of the 20th Century, Jews and Christians alike, greetings.

As you know, art works tell their own story, although often given to interpretation, still there is always a truth, which at times is hidden and yet still manages to emerge from the canvass to tell us its hidden story and its now new message.

It is at the heart of every brush stroke, every click of the camera, and every strike of the sculpture’s chisel. There are even times when a work is “covered over” as in the field of pentimentalism, when early works are purposefully “covered over”, only to reemerge over time to tell their own story.

This is even so when the covering over is deliberate, as in the case of many pentimenti works of art, It’s not by accident that I have come to appreciate the hidden in paintings, of the pentimenti, especially when it comes to looking beneath the surface and discovering what was once more apparently there.

For us, it is still there and even in its hidden or “covered up” state, it remains to tell us of its own story of truth.

Happy Chanukah, miracles and all,