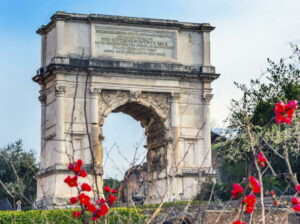 This week, it’s the Menorah which readily comes to mind. Not because we’re discussing seized Jewish art in light of the ‘reluctance’ of European governments and institutions to even consider ‘return,’ but because of the importance of possessing seized plunder as evidence of who has been shamed and replaced in the eyes of Gd and who has been elevated to the status of ‘true Israel.’

To be clear, the Menorah is the central most important religious object d’art (see Exodus 25), physically symbolizing a sacred religious motif dating back to the times of the ancient Temples in Jerusalem and continuing to this very day.

That being true, then where can we find the Menorah? Factually, plundered and carried off first by the Babylonians, (see Daniel Chapter 5) and then subsequently returned by the Persians to Jerusalem along with the returning Jewish exiles from the Babylonian captivity. Then later all of the Temple vessels were looted and carried off by the Romans during the Great Revolt of 70 C.E. in which the Jerusalem Temple was burned and destroyed and its treasures, along with the Menorah, all were carried off to Rome.

The Menorah was last seen there both physically as well as in physical relief and to this day, the Menorah continues to permeate the many halls and sanctuaries of Peter’s gravesite in Rome.

The Vatican as the true inheritor of Rome, along with telling Vatican reliefs, all continue to inform us where the Menorah was last observed and sequestered. Archives, manuscripts and official documents all tell of its importance, especially so in terms of Replacement Theology, a theology which explains the need for a New Testament to replace the Old, further explaining the need for a New Israel (the Church) theology to replace the Old (the Jewish people, the Bible and the Jewish Covenant with Gd).

I might suggest, given the reopening of cases relating to looted Nazi seized art, perhaps it is time to open up all of the basement storage to investigators in order to see the full scale of Vatican plunder which continues unabated to this very day. 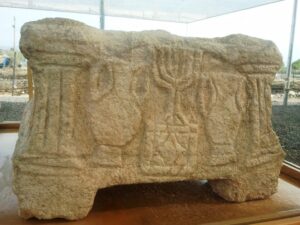 Vatican seizures of sacred Jewish art more than matches the scale of the Nazi seizure of Jewish art and manuscripts in Europe, which according to actual estimates amounted to 25 % of all known artworks across Europe. Of course this really does not compare to the Roman seizure of Temple treasures and the continued resistance to the return of sacred religious objects to the Jewish people.

Why is this important? Perhaps in ‘keeping the sacred spoils of the Jews,’ both sacred religious objects of worship and property in general, bespeaks (and bestows) a both real and perceived authenticity to the claim of ‘true and legitimate identity,’ all of which is considered to be the real battleground of Christain and Cathloic ‘Replacement Theology.’ Somewhat of a contorted twist on the new koine of ‘Jews will not replace us.’

The ideology of Replacement Theology is in claiming legitimate inheritance and ownership of the mantle of ‘Israel.’ To put this in more exact terms, this is the cleaned up religious ideology of “We will replace the Jews as Gd’s ‘Chosen’ People.

The Vatican hierarchy of Rome continues to this day to divert attention from its looted and sequestered storages of the very symbols of Judaism. They do so as these are the very objects that speak to their claim of the Vatican to be the real Temple and those who possess the Temple treasures and the Menorah as the true inheritors of Israel.

If this is wrong, then I suggest that they open the archives, the basement cells, and the various Vaticanesque dungeons, many of which contain sacred Jewish manuscripts, Jewish ceremonial art and religious lore.

If they have nothing to hide, then by all means, open the archives. Perhaps Esau still pines for the Birthright of Jacob, eponymously named Israel, the very Israel, who wrestles with Gd and prevails . . .

Stay tuned, as we explore this question further. Wednesdays at 7:00 and Sundays at 3:00 EST